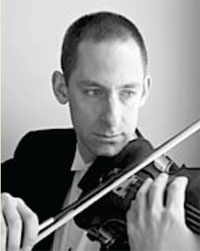 David Brickman, Principal Second Violinist of the RPO is both a performer and sought after teacher. Mr. Brickman is an Associate Professor at Eastman as well as teaching privately. Mr. Brickman is known for his great versatility and for his dramatic, highly personal interpretations of the solo and chamber music repertoire. With the RPO since 1989, David Brickman is also a founding member of the Finger Lakes Chamber Ensemble. You can also see Mr. Brickman performing with the Amenda Quartet. He has also performed at the Skaneateles Music Festival with Hilary Hahn, Diane Walsh, Eliot Fisk and members of the Emerson String Quartet, and with Chamber Music Rochester. A graduate of the Eastman School of Music and Indiana University, David Brickman truly is one of Rochester’s Musical Treasures!

Mr. Brickman has recorded several works of contemporary American chamber music for the Milken Foundation, released on the Naxos Label. He is a featured soloist on the Rochester Philharmonic Orchestra’s 75th Anniversary CD, performing an arrangement of Vernon Duke’s jazz standard Autumn in New York written for him by Jeff Tyzik. Mr. Brickman is himself a skilled arranger; he recently performed Elgar’s Suite, his own orchestration of four short works originally for violin and piano.

**Mr. Brickman and Patty Sunwoo have recorded Suzuki songs and other students pieces which can be downloaded. These recordings are great for students to play along with when practicing. Check out www.playmypiece.com **