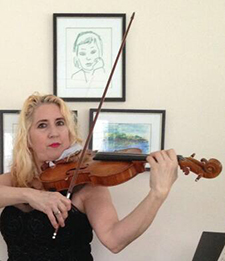 Born and raised in Detroit, Lisa Toth studied violin with Jack Boesen and Linda Snedden-Smith of the Detroit Symphony. Ms. Toth was appointed concertmaster of the Detroit Civic Orchestra in its inaugural season, under maestro Antal Dorati.

In 1980, Ms. Toth moved to Rochester, NY, and studied with then RPO concertmaster, Howard Weiss. Since then, she has also studied with RPO violinists Boris Zapesochny, Wilfredo Deglans, and Tigran Vardanyan.

In 2000, Ms. Toth founded Avon Symphony, conducting that orchestra for nearly a decade. From 2001 through 2013, Ms. Toth was concertmaster of Genesee Symphony in Batavia, under the baton of Raffaele Ponti.

From 2010 to present, Ms. Toth has held the concertmaster position of Brighton Symphony, a 65-piece orchestra, under conductor Ric Jones.

In February of 2011, Ms. Toth opened Toth Music Studio (initially in Canandaigua) which is now located in Bushnell’s Basin, NY. There, she teaches violin, viola, cello, and piano.

An active performer in the local musical scene, Ms. Toth has played with the Rochester Philharmonic, Brighton Symphony, Genesee Symphony, Greece Symphony, U of R Orchestra, and is a member of Rochester Morning Musicale and Fairport Musicale. She has regularly performed as violin soloist throughout western NY with pianists Dr. Kevin Nitsch and Sonja Shelton, and has also collaborated/recorded with indie guitarists Gregory Paul and Tom Riccio.

Ms. Toth is the proud mother of a daughter and son who are also musicians, and has recently added the title of doting grandmother to her resume.